Newcastle upon Tyne is situated on the north bank of a shallow gorge on the River Tyne. It is believed that the Romans first built a bridge on this site, although some believe in 1080 when the Normans were building a wooden fort to safeguard the crossing that they also erected a wooden bridge.

Newcastle was the lowest point downstream at which the River Tyne could be bridged. Another bridge was built here in 1250.

In the 17th century nearby coal deposits encouraged the development of the glass industry. There were also local salt deposits and local people were also involved in the manufacture of soap. Coal, salt, soap and glass were transported from the town by coastal vessels and by the beginning of the 18th century Newcastle was the most important town in the North East. 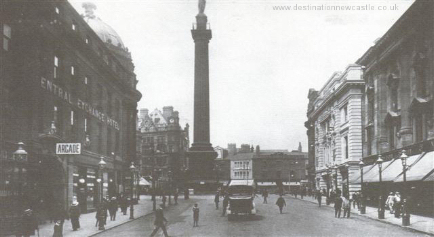 NEWCASTLE UPON TYNE IN THE 16th AND 17th CENTURIES

In 1539 Henry VIII closed the friaries. In 1540 he closed the nunnery. However Henry also founded a grammar school in Newcastle which was incorporated in 1600. In the 16th century exports of coal boomed and it overtook wool as the town’s main export. It is estimated that in 1500 about 15,000 tons of coal […]


NEWCASTLE UPON TYNE IN THE 18th CENTURY


NEWCASTLE UPON TYNE IN THE 19th CENTURY


NEWCASTLE UPON TYNE IN THE MIDDLE AGES

The city of Newcastle Upon Tyne was founded at the lowest place the Tyne could be easily crossed. In 1080 the Normans built a wooden fort to safeguard the crossing. They also erected a wooden bridge. (The ‘new castle’ was rebuilt in stone in the 12th century). Soon a little town grew up in the […]

The oldest part of Newcastle is the Quayside, which was until the nineteenth century, the commercial hub of all Tyneside. Most historical of the buildings in this area of the town are the keep of the Norman castle and the adjacent fourteenth century church of St Nicholas with its famous lantern tower. Until the onset […]

The `New Castle’ of Robert Curthose was built of earth and timber and was situated on a defended plateau overlooking the River Tyne. It seems to have performed its defensive role well until 1095 when it was seized by Norman barons under Robert De Mowbray Earl of Northumberland, during a rebellion against King William Rufus. […]

In 1265 the burgesses of Newcastle decided to supplement the defences of the castle with the building of town walls to protect them from the raids of invading Scots. When completed the walls extended for over two miles around the town and were never less than 7 feet thick and up to 25 feet high. […]


The Seven Bridges of Newcastle

All views of the Newcastle riverside, are of course dominated by the seven famous bridges across the Tyne, which link the city to Gateshead on the south bank of the river. From west to east they are; the Redheugh bridge, King Edward VII bridge, Queen Elizabeth II bridge, The High Level bridge, the Swing bridge, […]